A user creates a unique username, input their email, create a password, fill and submit rest of the form. Now the user can join and create contests.

A user creates a single match or tournament, select the gaming console, the game, how many players (contestant gamers) participating in the contest, the currency (USD, BTC, LTC, DOGE), the entry fee and reward for the contest. Press 'Create' and a contest will be created and listed on the platform for users to see. 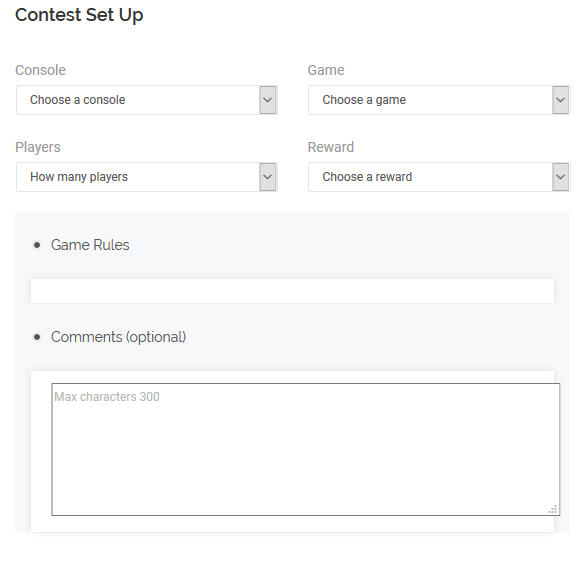 After a user creates a contest, it will be listed on the Contest Manager and Contest Listing page for all users and visitors of GamerContest.com platform to view. From there, people can request to join the users' match or tournament and the user who created the contest chooses who to confirm. The user will be notified by email when they get a new requests. NOTE: We recommend users set their email service providers to favor messages coming from support@gamercontest.com so it does not spam any new requests that the user wants to be aware of.

A user can also share the Match Detail link to anyone they would like to challenge in the game contest. When a user creates a match or tournament, a detail information link of the contest is made. The user can share it to people directly as an invite. Other users can select the request button at the bottom of the page to join the contest. 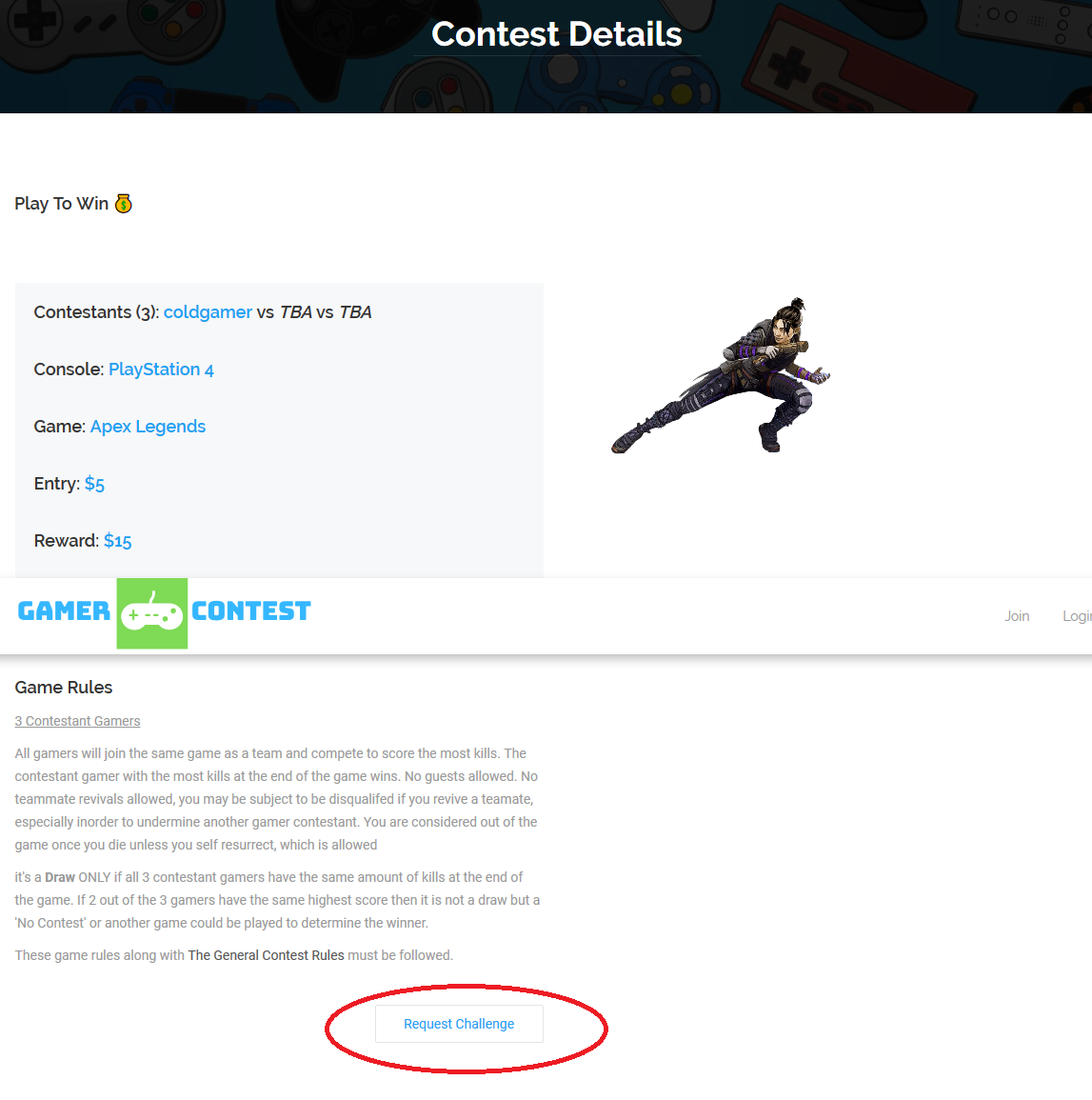 When a user receive requests for the contest they created, it will be shown in Contest Request List page ( Contest Manager ). The user can then confirm any gamers that they would like. Once gamer is confirmed, the gamer making the request will receive a notification saying that their request have been accepted and will be directed to meet the user (or other users who are in the contest) on a private contest board page where the users are able to communicate live with eachother. Contestant(s) will meet on the private contest board page (by the round start time or determined time) to begin the contest. 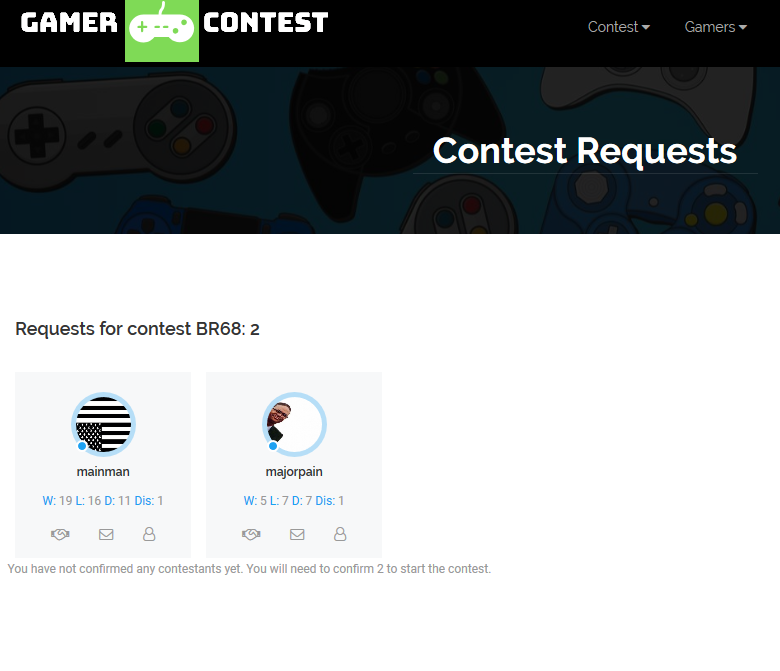 At the contest board, user contestants must submit an accurate public live stream or their channel link where the game will be streamed from. (Youtube/YourChannel, Twitch/YourChannel, etc). On the live stream, they must put or add on the title the contest ID (example: gamercontest.com ID: 243). This way GamerContest.com judges can find their contest better in case of a dispute or if need be. The live stream is a contestant's main source of evidence so it must be valid and accurate. Except, if the game being being played is Axie Infinity then no live stream submission needed, instead just submit your ronin public address. 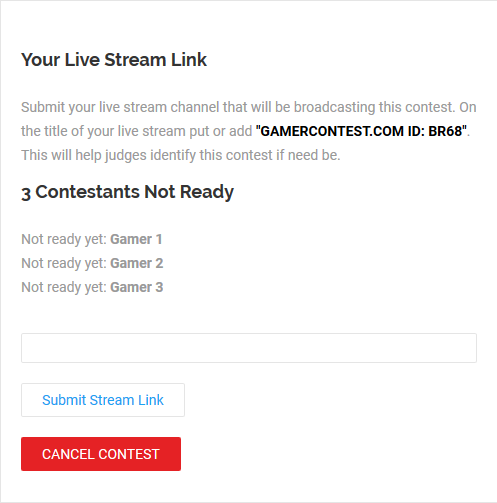 All the contestant gamers have been confirmed, can communicate through the contest board live chat and should be getting ready to play.

For Single matches: The creator of the contest can still cancel the contest and the other contestant users can still unjoin or back out the contest BEFORE being on "READY" status.

For Tournaments: Once all contestants have been confirmed, the creator of the tournament can not cancel and other contestants can not unjoin the tournament or their matches, regardless of their "READY" status, they must adhere to the tournaments round times or force to forfeit when contest is Advanced when time expires. (see Tournament Rules for more info).

Once all user contestants are connected online through the console's gaming network, got the game set up the way it was agreed upon, feel comfortable with the connection and are about to start the game then they should click "GO READY". On "Ready" status, the contest is on and must continue at that point. Choices at that point for the user contestants would be to complete the game then submit The Results (winner, draw, or no contest) or Dispute.

After the game is done, user contestants will select the Results that reflects the outcome of the game. Either The Winner, a contestant gamer won the game in alignment with the Game and Contest Rules, it was a Draw, all user contestants tied in aligment with the game and Contest Rules, or a No Contest, meaning all users involved in the contest agree to just cancel the game for whatever reason and not make it count on their records and entry fee's will be returned to their respective Funds Account. Winner will be notified at the end of the game of their winnings and prize money will be added to their Rewards Account. If it's a draw then the prize money will be split and added to each user contestants Funds Account and all user contestants will be notified of their equal splits. All records will be updated reflecting such outcomes, except for No Contest results.

If user contestants can not agree on an outcome or results (winner, draw, or no contest). Then They can dispute it and allow the GamerContest.com judges to review the streams and possibly any other evidence. Dispute decisions are final and take up to 24 hours to conclude a decision. Disputes will also show up on users' profile record and having too many disputes may deter other users from wanting to compete with the user with too many disputes. And if we at GamerContest.com see a user continously in disputes in contests that we clearly feel it's obvious there was no reason for it to be disputed and it seems to us like the user is just being spiteful because they lost then that user may be subject to their account being suspended or terminated. We encourage users in matches to be able to try communicate first to see if they can come to an agreement or understanding before submitting a dispute for a contest.